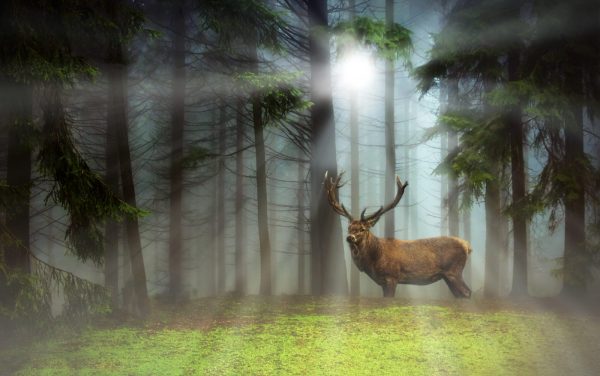 Jump Straight to Your Topic

It has been handed down from one generation to the next, that the Best Deer Hunting Times are at dawn and dusk. However, the reason for this is often not explained.

Deer are crepuscular, which is a fancy word to say they are most active during twilight hours, instead of diurnal (daylight) and nocturnal (night).

This does not mean they are not active during the daylight and nighttime hours, just less so.

The front end of my truck can attest to that. Food source, temperature, wind, moon phases, and time of year can have an effect on the deer patterns and, therefore the best deer hunting times. 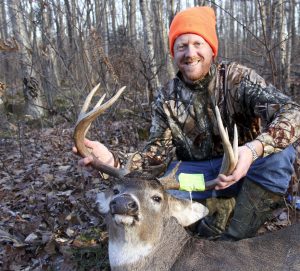 We have to remember that deer are prey animals. In the wild, their main predators are wolves, coyotes, large cats, and bears. These predators are mostly nocturnal in nature. This requires the deer to be hyper-vigilant during the dark of night. They will stay under cover of brush and timber until their stomach requires them to make a quick feeding run out to the food source. Then it is back into the cover of the brush.

When we see them at dawn, they are heading out to fill up their stomachs, after a long night of tension. They are tired, lethargic and hungry. After a big breakfast, it is time to head to their bedding area for a short sleep. Deer are lucky to sleep 4 hours at a time before they need to eat again. Deer are ruminants, meaning they have four stomachs. Food is stored in the first stomach, called the rumen. After consuming a large amount of food, the deer retreat to an area of relative safety to start digesting the food. The deer regurgitates the food into its mouth to be chewed again for better digestion. Cows aren’t the only animals that chew their cuds. This ruminant digestion process results in the deer feeding 5 times a day: early evening, midnight, early morning, late morning, mid-day.

When we see them at dusk, they are usually having their last feeding before going to the brush and timber for a long night of avoiding predators again. At this time, they will be rested and more likely to be on high alert.

It is opening morning, you put on all the new camouflage you just bought, gather up your gear and hike out to your tree stand. By the time you get there, you are dripping with sweat. This can be a problem.

Deer can smell you from a long way off. Deer have almost 297 million scent receptors in their noses. This makes their sense of smell better than a dog’s. Common sense dictates that you dress for the temperature and use a scent blocker.

The temperature will also affect the pattern of the deer. Any change in the deer pattern will affect the best deer hunting times.The first thing you need to know is the historical average temperature and humidity for your area at the time of the hunt. Next is pay attention to the lows and highs starting at early season.

When you establish a weather pattern, you can use it to help optimize the success of the hunt. The basics to remember is, on warm days hunt the cooler spots, closer to shade and water sources. On cooler days hunt the food sources, scrapes, rubs, and transition areas.

When the forecast temperature is around 10 degrees below the average, deer like the cooler temperatures.

Scrape activity increases when there are 3 or more consecutive days in the low 40-degree range. This is helpful during the early season.

Feeding and browsing will increase after two or more hard frost.

Other weather patterns to pay attention to:

In areas that have high humidity, the daylight activity will decrease if the humidity is 50 percent or higher. On those high humidity days, the deer will stay more in the shaded areas. Those times it would be a better idea to hunt the game trails going from the bedding area to the feeding areas.

Deer can be sensitive to the barometer. If the weather is calling for a steep rise in temperature of 10-degrees or more in a 24 hours period, hunt the evening before the increase. A front is probably passing and it is causing the barometer to rise. More on the best weather apps here.

When deciding on when and where to hunt make the wind your friend. An exceptional sense of smell, allows the deer to pick up scents from a long way off.

It can be as much as up to one half a mile. How they react to the smell of humans can depend on a multiple of variables. Are you hunting in a rural/farm area where humans are a common smell?

Has the deer ever had an encounter with a human before, good or bad? Some deer will bolt at the first smell, others will walk right up to the hunter as they nap leaning up against a tree.

For a better chance of a successful hunt, you should assume they will bolt at the first smell. Therefore, it is best to hunt with the wind blowing in your face, and away from the direction, you expect the deer to be coming from. It is a good practice to have different stands that allow for hunting when the wind is in different directions.

Google “hunting moon phases” and several sites come up offering information on the best deer hunting times  according to the moon phases. These apps will show things like when the sun rises, and when the moon rises. They will also show what phase the moon is in on that particular date.

They then go on to state what time of day will be a good time to hunt and what times will be mediocre times to hunt on that particular day. Some of these sites allow for you to put in your zip code to get a hunting forecast for your particular area. More on these sites here.

So where is the controversy?

As I researched moon phases for this article, I found opinions from both ends of the spectrum and some in between. Ask one hunter and he will say the moon phase has no effect on the best deer hunting times. Ask another, and he will say it has a minor effect. While yet another will state that it is important to use the moon phase to figure out which days will be the best to hunt that month. The one thing they all agreed with is that the weather has more of an effect than the moon phases.

For those of you that want to have every tool in your arsenal, here are the basics of how the moon phases affect the best deer hunting times.

If the moon rising in the evening is full, the evening movement will be slower. This makes sense because a full moon allows the deer to see the predators better. They can feed better after dark. This results in them being less hungry in the morning and the morning activity will be slower. There is a possibility that they will go to their bedding area early and not be very hungry until late morning.

During both the first and third quarter moon phases the moon will peak during low-light periods of sunset and sunrise. This low light allows the deer to be more comfortable during these times. Therefore, the deer activity will increase during this time.

During the darkness of the new moon, the deer will be more active slightly later in the day. It all boils down to survival and how comfortable the deer feel.

Best time to hunt the rut:

A buck’s testosterone starts to increase, his guard is slightly let down, and he is feeling more aggressive. This is the start of the breeding season, most commonly called the rut. This breeding season can start at different times of the year for different states. In the northern a states and Canada, it peaks in Mid-November. In the southern states, it will vary significantly. It might be early October in the Carolinas and as late as January in Alabama.

The best time to hunt the rut depends on the phase of the rut. There are four basic phases. Pre-Rut is mid-September to late-October. During this time deer activity will increase. Rubs and scrapes will start to appear. When farmers start taking their crops out of the fields, deer will transition to more cover. If you are in an area with oaks, start hunting the acorn crop areas close to bedding areas. Evening hunts tend to be more productive during this phase.

By Early-November the buck’s testosterone is demanding he seeks out a doe, who is in estrus. This is called the seek and chase phase. It lasts about 10 days. During this time the rut signs will be more prevalent, the deer are more aggressive and looking for a fight. It is a good time to start calling, rattling and using decoys. This is a good time to find deer fighting one another for dominance.

The third phase is the peak breeding phase. This is the peak of the rut and happens during mid-November. As bucks breed one doe, they will travel to find another doe in estrus. The deer activity is at its peak. Buck’s will have one thing on their mind and tend to be the least cautious during the peak of the rut.

The last phase, Commonly called late season is from late November to late December. This is the time that bucks will breed any Does that did not settle the first time. The Does will also start to herd together and search out food sources.

At this time, it is common to see several Does with one buck, as he waits around to see if any of them come back into estrus. This is a good time to find a large food source, like any crops that are still standing or cut.

In conclusion, food source, temperature, wind, moon phases, and time of year can have an effect on the deer patterns and, therefore the Best Deer Hunting Times. But every successful hunter will remind you that deer have a mind of their own and just when you think you have them figured out, they will fool you.

Our philosophy is, the more prepared you are the better chance you have of bagging the buck of the lifetime, and filling the freezer with meat.

Pull The Trigger on Current Deals with CamoFire

Deals Of The Day

All About Vortex Scopes